Bucks, Ducks & Brews
Welcome to Bucks, Ducks and Brews! If you are new to the site feel free to browse through the forum but we would love to have have you join us as a member. To join please click "Register" below and create a username, it is totally free and no personal info is required accept for an email address. Once you have created a username you will receive an email to the address you provided to activate. Thanks for your support and we look forward to meeting you.

» Grassing in the blind!

» What is that? Unexpected Trail Cam Pictures

Yesterday we headed over to M&M hunting preserve for our 2nd annual pheasant hunt. We actually started the day with a round of sporting clays then had lunch and moved to the hunt for the afternoon. We had the same rowdy bunch as last year out there taking them down ScottishRifle, GermanBear, Kill Em All and BS. This was the first time any of us had shot sporting clays and I have to say it was a really fun time. I described it as a mixture of golf and guns, how much better can it get! The other amazing part was after all the terrible shooting I have done this year I was rather impressed with myself managing to pull off a win shooting 41 out of 60 targets

(had to mention that!). The clouds broke about half way through the round and things were looking to be great for the afternoon. We headed back to the truck after sporting clays to whack down a sandwich and then we met up with Keith(guide) and Cole(German Shorthair) heading for the fields. The boys were nice enough to let me take down the first bird and many great shots followed from the entire group. All in all we killed 25 pheasants and enjoyed a beautiful day in the fields. A big thanks goes out to Keith and Cole for putting up with our shenanigans for a second year in a row. If you are looking for a great hunt look them up at http://www.mmhunting.com/ and be sure to request them to guide your hunt!


REMEMBER: Please click "Register" and sign up so you can reply. It's free and their is no annoying marketing emails! 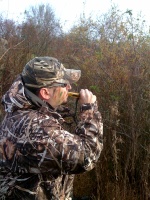 Wow - looks like you had a fun day! Save me a pretty pheasant feather :-)

REMEMBER: Please click "Register" and sign up so you can reply. It's free and their is no annoying marketing emails!